The 2016 Cape Pioneer Trek solo women’s champion, Nicky Giliomee returned to the race with under 23 South African XCO champion, Frankie du Toit, to complete as the Junto Ladies team in the UCI Women’s category. The pair endured an eventful and emotional week, which came to a dramatic conclusion on the morning of Stage 7 when they were disqualified from the race for receiving outside assistance on Stage 6. Lying in 3rd overall at that point their disqualification only further cemented their status as two of the most popular riders in the event. Here is Nicky’s account of the 2017 Momentum Health Cape Pioneer Trek, presented by Biogen:

TBT to Pioneer Trek 2016: So excited to race with one of my best friends Frankie du Toit from Sunday for Junto It.

Not knowing what to expect, Franks and I set out slow and steady. We knew we had a long week ahead. The water points were amazing and we did better than expected.

Frankie wait for me… Third again today in the howling wind. Thanks Franks for the constant banter! Tomorrow is the biggie to George! Massive thanks to Junto It for making it possible!

A little muddy today. Rain. Wind. Mud. But we made it. Tomorrow is soul food for Franks, singletrack, short and sharp. I’ll be hanging on for dear life. Still in third. Thanks Frankie du Toit for being the greatest.

I knew I would be in pain all day, racing with the XCO u23 champion on a short course – how could I not be? And it was. I was in pain all day trying to keep up with Franks on the short, sharp, ups and downs and tricky singletracks. Only a three day stage race to go.

Words by Frankie du Toit: Day 5 was characterized by headwinds, gravel roads and the infamous Montague Pass, but we survived and we’re recovering hard for tomorrow. Thanks Suzi Giliomee for being the best back up/support ever! 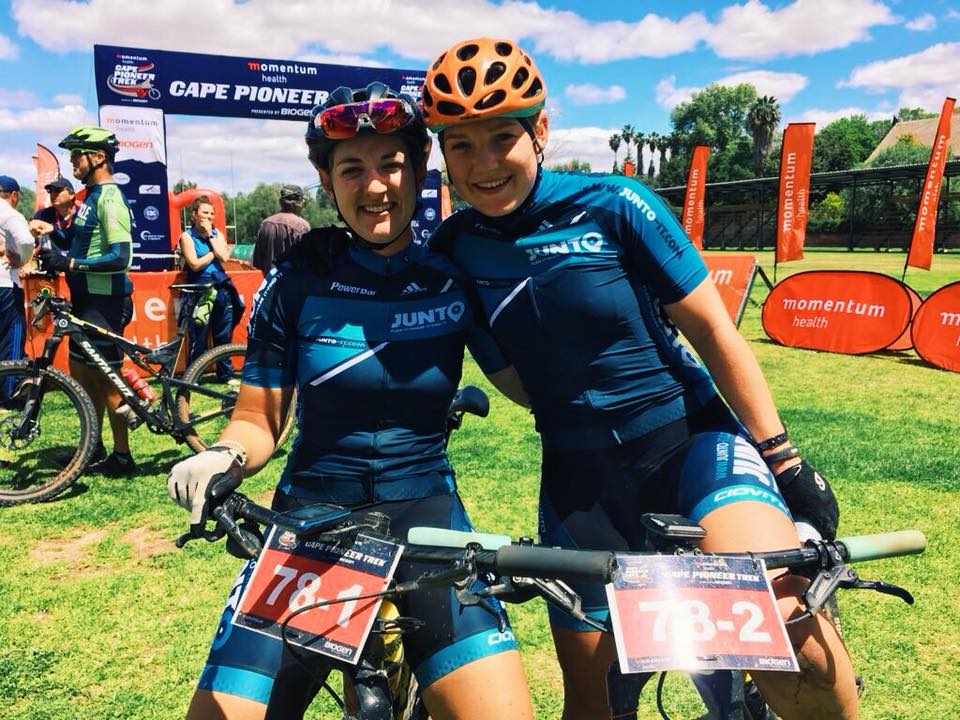 Disaster for 3rd placed @JuntoIt’s @frances_dutoit & @NickyGiliomee as they suffer a leaking valve 8.5km into Stage 6. Big chase back ahead pic.twitter.com/Vkjip6Fej0

Issue 1: Literally as we rolled off the start we had a flat back wheel (first 200 meters). Bombed it. Flat again 200 meters later. Sat next to the road trying to figure it out. The sweep vehicle loaded us on the back for the neutral zone and took us to the end of the neutral zone (as far as they were allowed to) where we then waited for mechanics. The amazing guys from Spur helped us fix a what we later found out was a leaking valve. When we eventually started we were 15 minutes behind the LAST rider.

Issue 2: 45km in I ate sh*t. Crashing in spectacular style, skidding for what felt like forever like the blady matrix. Damage – hanger bent into spokes as well as broken skin and leg. Also, my top two and bottom two gears didn’t work and the in-betweens only worked on every second gear. An interesting idea to the finish.

Issue 3: my chain popped off and got jammed between the cassette and my spokes and between my front blade and frame. Franks and I fixed it in no time but we nearly lost my fingers in the process,

Issue 4: Frankie’s bottle cage decided to leave us mid downhill, bottle went flying, and we were left hunting for bolts in the rocks. We couldn’t find them and decided to throw everything in our backs and off we went. Again.

Issue 5: Broken bodies from chasing all day. The worst battle for us today was mental. It’s incredibly difficult to keep fighting and keep going when you are constantly hampered by technical and mechanical issues. Although we collapsed at the finish in tears we made it. Thanks to my amazing partner for staying so calm, laughing with me at our bizarre day and for being such an absolute ray of sunshine.

Good news- we still in third and tomorrow is the last day, our bums are so excited.

Thanks to everyone for the incredible support and kind words along the route. It helped more than you know.

A ridiculously emotional week has come to an end. Our Cape Pioneer Trek journey started last Saturday in Mossel Bay and ended in tears for us yesterday in Oudtshoorn. After our disastrous day on Friday (read all about it in a previous post), we didn’t think it could get much worse.

However, after breakfast yesterday, disaster struck again. The UCI commissars phoned to tell us that we had been disqualified after accepting outside assistance from team Spurs mechanic in the neutral zone (which we were led to believe was in fact allowed) on Friday morning. We were obviously devastated with the outcome and it was a bitter pill to swallow, particularly after our emotional day on Friday. But at the same time, without the help of the mechanics on Friday, we don’t think we would have been able to complete the stage.

After chatting to some people we decided to ride yesterday anyways to complete the race. We started right at the back and cruised through the day enjoying the scenery, stopping at water points and chatting to everyone around us. What a humbling experience. Everyone was shocked and almost more upset about what had happened than we were. Our spirits were immediately lifted as early as the neutral zone and everyone was so encouraging and full of compliments.

Although our Pioneer didn’t go as we had hoped, we learnt so much about ourselves this week. We had a blast dancing, singing and joking our way through the week and quickly became known as the Junto Ladies around the camp. Dryland once again put on an amazing race. The food, the organization, the route, the people, everything. Just amazing.

A massive massive thank you to our number one supporters, Suzi and Hein who came through everyday to be at every start, water-point and finish. To Junto for giving us the opportunity to race together and for letting us understand the meaning of “together” on another level. To EPT recovery for the daily massages and banter – without you guys we would not have made it through the week. To Seamus for waiting for us everyday to finish, the ridiculously creative interview questions kept us entertained and our brains working. To Paul Valstar for the flattery and compliments everyday, you really lifted our spirits. To all the supporters along the route, Alexa, the Hammonds, Monique, Ters and Leana, the adidas guys, and the list goes on and on. To all my sponsors for everything, Junto It, Powerbar, Omnico, Squirtlube and adidas.

To my partner, Franks, you are an absolute machine and ray of sunshine in my life. Being able to race with one of my best friends was an absolute treat. Your sportsmanship, bravery and kindness was amazing to watch. You are a true champion and I have no doubt you are going places- you are what is good about the future of South African cycling. How lucky am I to have been able to race with such an absolute talent.

Also a massive thank you to everyone for all the kind words, messages and calls. It really means the world to us. I guess now we have unfinished business and we will have to be back. We had an amazing week with old friends and made so many new ones. This week truly summed up what stage racing is all about. Friendships, journeys and amazing experiences.