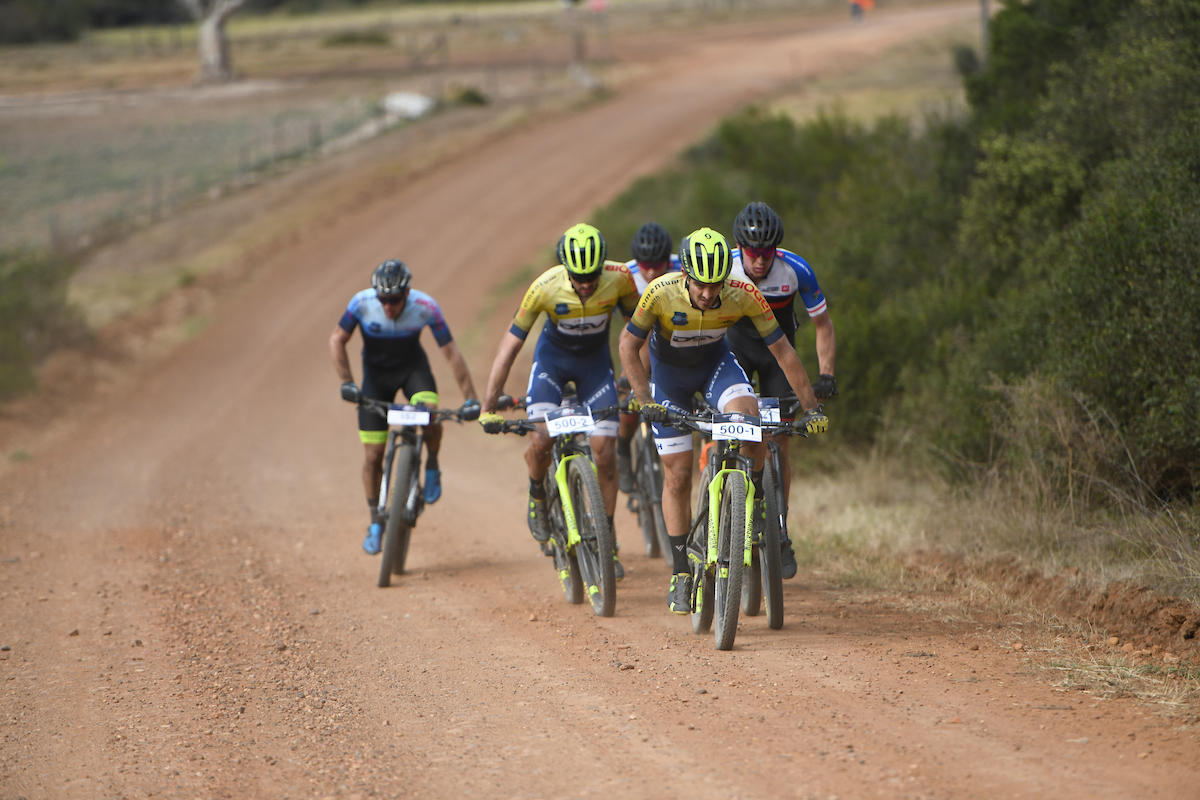 The second stage of the 2019 Momentum Health Cape Pioneer presented by Biogen saw riders take the plunge into the wild side of the Southern Cape.

Often described as the ‘Prince Stage’, the once familiar trails in and around Mossel Bay have seen a complete overhaul for this year’s race. True to the spirit of adventure that the event evokes, the route traversed the untouched heart of Gondwana Game Farm where spectators included herds of springbok and other roaming antelope.

In a race that was almost as wild as the trails, the first significant plays for the yellow jerseys were made today. It was a memorable outing for the Dutch pairing of Tim Meenge and Gerbon Mos, who have been working towards their maiden stage victory for the past five years. The KMC Fruit2Go team will now don the overall leaders’ jerseys come stage 2.

“We’ve been waiting to wear these yellow jerseys for a long time! It was a tough day for most teams, but we just closed our eyes and held on and everything seemed to work in our favour,” said Mos.

It was a disappointing day for early race leaders Arno du Toit and Gert Heyns (DSV Pro Cycling) who lost significant time after a puncture. While the powerhouse pair put on an impressive performance as they clawed their way back to the front runners, they had to settle for fourth place behind Julian Jessop and Timothy Hammond (DEVMCO – UMHLANGA ARCH / SPOT AFRICA) in second and Moran Vermeulen and Krenn Wolfgang (Asrin Cycling 2) in third on the day.

The fight for early dominance in the women’s elite field was just as fierce. After suffering from a mechanical in the Prologue, the Dormakaba pairing of Sam Sanders and Amy McDougall made it clear that they were out for redemption.

For the majority of the route they lurked in the slipstream of the GC leaders Theresa Ralph and Sarah Hill (Galileo Risk – Liv), waiting for the right time to make an attack. Dormakaba finally pounced when Hill and Ralph got an unfortunate puncture.

It wasn’t long before the leading pack was reunited, however, as a determined Ralph and Hill made their epic comeback. In a final sprint for the finish line it was Sanders and McDougall that took today’s stage honours. The Galileo Risk – Liv team will be satisfied, however, having done enough to defend the top step overall.

“We would have liked to have made up the time from yesterday, but Thersa and Sarah were very strong today. It’s going to be a tight race from here, but that’s what makes it all exciting,” said Sanders.