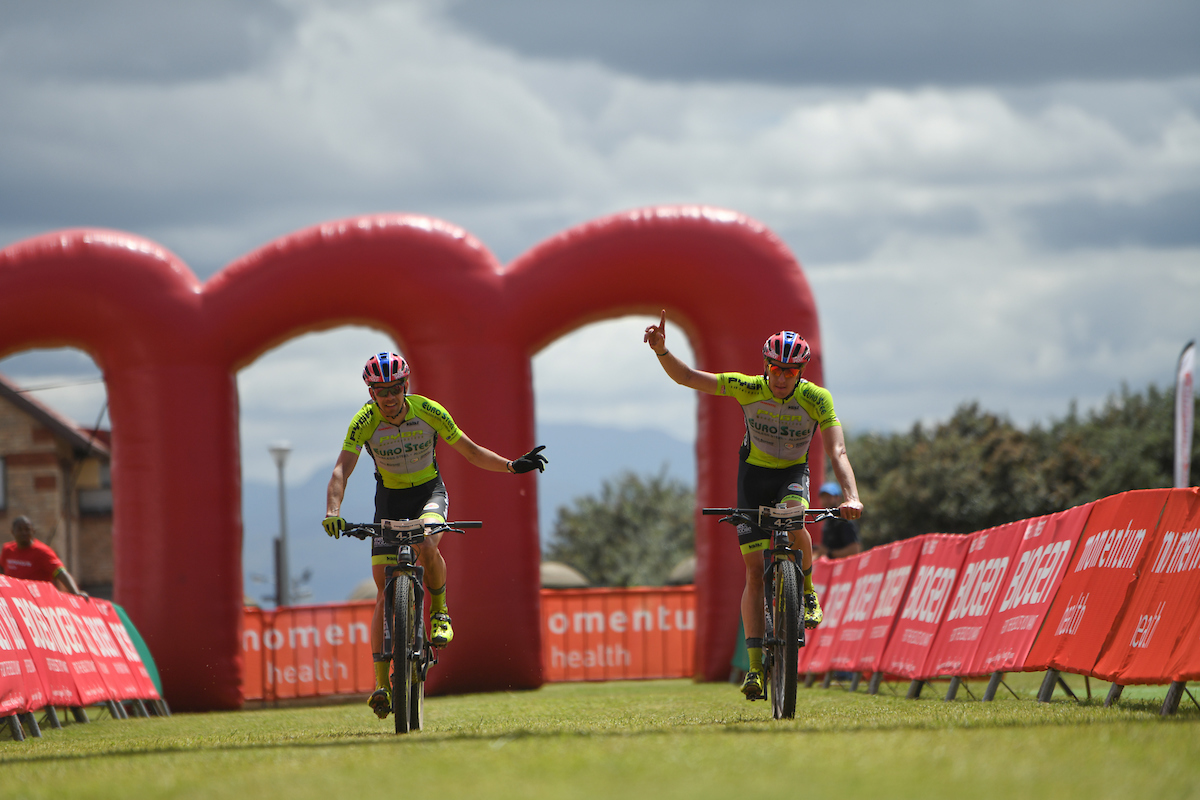 The first stage of the Momentum Health Cape Pioneer Trek presented by Biogen brought an onset of upsets today.

In heat and high winds, Team Spur Specialized’s Alan Hatherly and Simon Andreassen set off from the Mossel Bay start line with targets on their backs following their impressive Prologue victory.

In a stage suitably described as ‘Gondwana Glory’, riders were presented with a demanding 96km route and 1650m elevation gain to conquer.

The testing weather conditions only added to an already challenging distance, and a select group of about 10 riders was quickly established up front. In a tight tussle that unfolded throughout the nail-biting race, the lead changed constantly.

Hatherly and Andreassen were the first to enter Gondwana Nature Reserve with Pyga EuroSteel’s Philip Buys and Matthys Beukes close behind them.

The pace really picked up at that point and Nad MTB Team’s Matt Beers and Gawie Combrinck were forced to tap into low gear to close the gap.

With just 20km’s to go, Pyga EuroSteel put their heads down and made the attack that would ultimately secure their victory over Hatherly and Andreassen, who finished in second.

“It got really tough at that point – we’d been making multiple attacks and accelerations all day. I was definitely taking some strain but managed to catch up to Matthys and just sit behind his wheel until the finish,” explained Buys.

As marathon experts, the Pyga EuroSteel pair drew on years of experience to stay ahead of rivals Hatherly and Andreassen.

“They specialize in Cross Country style events, and their acceleration is a bit better than ours. The difference is that we’re trained to accelerate multiple times over longer distances, and that gave us the advantage today. The idea was to wear them out before the finish, and then use our endurance to push right to the end,” said Beukes.

The victory secured the yellow jersey for the team with a slender General Classification lead of just one second.

Snatching up the third spot for the day was KTM Pro Team’s Manuel Pleim and David Schoeggl, who fought hard to close the gap on the leading group in the final stages of the race.

The competitive female category also saw a shuffle in the pink jersey.

After an impressive Prologue effort, Team Landrover Women faced an incredibly challenging day in the saddle.

“My legs just felt like they had nothing to give. It was extremely frustrating, especially because I knew I was letting my teammate down,” said a clearly disappointed Aurelie Halbwachs.

The Team Garmin pair of Yolandi du Toit and Catherine Williamson grabbed the opportunity to storm to the top step of the podium. A second place from Cemile Trommer and Karen Brouwer, however, meant that Team KMC Focus would walk away with the pink jersey and overall lead.

“I’m really surprised we got the pink jersey, today was tough with the wind. We’re also not used to the heat at all, so had to dig deep to push for the podium. Karen pushed me at the start, and then I took over and pulled her during the second half of the route. We love getting to experience South Africa! The terrain is so different, it’s not like anything I’ve experienced before,” said Trommer, who lives in Germany.